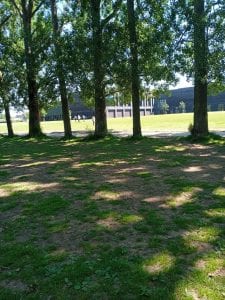 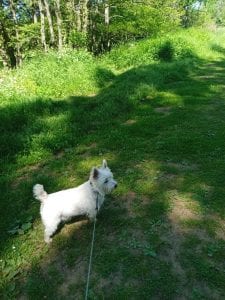 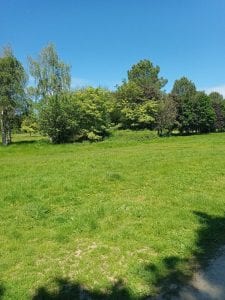 My son unexpectedly popped in this morning after taking my granddaughter to school. On talking of what I would like for my birthday he suggested a Bungy jump, a Balloon ride and a Helicopter ride. The result was a hilarious conversation with him doing impersonations of me whilst talking about all three.

A short while later I took Casper to our local large park and it was a beautiful morning with shade from the trees as the sun was hot. It brought me and Casper and everyone in the park so much joy. People were smiling and chatty (at a distance.) Dogs were having a whale of a time.

At this park, there is a council-run hire of cycles for disadvantaged people and they were so enjoying riding around the park. It had been closed for a year.  A walking group of older people also passed us as they crossed the bridge over the Monks Brook which most of the dogs like to paddle in. The dogs having fun and getting on well always makes people smile and warms my heart.

I took a video of Casper and am sharing it in the comments. It would have been longer but I forgot to press record. (Ha Ha.)

I’ll add some photos as well.

It seems to me that it is the simplest things that bring us Joy especially with nature.