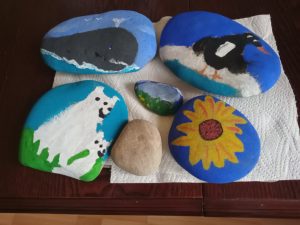 Rock painting at Nanny’s.
Grandad painted the whale. Bella finished her polar bears and painted a penguin. The sunflower was painted by Janet a few weeks ago.
They all need the back painted and then to be varnished.
We use ordinary children’s poster paint and then I used clear nail varnish last time. That’s for adults only to do.
I will post them finished in the near future.
Love and Blessings Lins, xxx.
P.s.
You are allowed to sing, jig about and make funny noises whilst painting.
3 cheers for grandad who managed to cope whilst he had toothache when Bella dropped a plastic spatula with yellow paint on it. Casper had been lying nicely near us waiting for just such a moment. Quick as a flash he dashed under the table and got it.
He wouldn’t let Dave and I get it and moved under all the chairs. Bella said “I’ll get it from him” and quick as a flash disappeared under the table and snatch it from Casper. The yellow paint was gone and she spent the next half hour asking Casper if she could see his tongue to see if it was yellow.

4 thoughts on “Rock Painting At Nanny’s”